Not only is SK Tapa making a Baltic Handball League debut this season, but the club has never played in European club competitions either. So it will be a debut in official international competitions for the club, which has for very long been an excellent producer of talented players.

Furthermore, SK Tapa has never finished in top three of the Estonian league or won the cup, making it the only team in this season’s BHL without such laurels. But underestimating the youthful side would be a grave mistake for all opponents, SK Tapa proved this last season in Estonian championships.

In the interrupted season, Tapa defeated HC Tallinn and Viljandi HC in league matches, plus lost to title-holder Serviti Põlva only by two goals. In addition, the club introduced themselves as the best-supported side, drawing an average crowd of 232 spectators – by far the best in Estonian league.

“We had a good season developing and I seriously believe, we could have challenged the best teams and perhaps reached for the medals for the first time in history. In that sense it is a shame, the season was interrupted, but we have to look forward and not back,” said SK Tapa’s key figure and head coach Elmu Koppelmann.

“For a year or so we had discussions inside the club about the possibility of joining the BHL. And now we had the chance and we grabbed it. Of course, for a small club and in difficult situation due to COVID-19 it has not been easy, but we have good partners and sponsors,” added Koppelmann.

“The decision itself was very easy, because it is clear our team needs new challenges and good games in order to develop further. We have managed to keep most of our last season’s squad and negotiations with some players are still ongoing to be even stronger,” claimed the man, who has been involved in handball for over half a century.

Handball in Tapa started developing already in the end of 1950’s, first 11 v 11 and later the modern game. Although the results in adult handball have not been great, the youth teams are almost always competing for titles and medals. Tapa has produced legends like Ain Pinnonen or Ahmed Porkveli, as well as today’s national team players like Kaspar Lees.

“For the new season we started in July under my coaching partner Aron Jaanis and have now advanced to trainings in the hall. We have several international tournaments or matches planned and have over 20 players in trainings,” explained Koppelmann, who has brought back young talent Vahur Oolup after a year in Danish handball academy.

Tapa is not only a young side, they also can count on some experienced ex-internationals. Goalkeeper Mikola Naum turned 40 this summer, but has won the BHL twice with HC Kehra and played 71 matches for Estonia. Another former international is local product Aleksander Oganezov, who rejoined the club last season.

On photo: Former international goalkeeper Mikola Naum turned 40 this summer, but is still going strong and is a key player for SK Tapa. (Photo: Helin Potter). 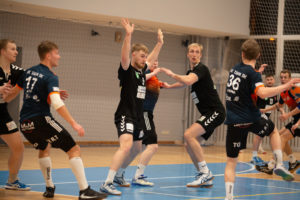 BHL resumes with cross-border matches in Lithuania and Estonia

After an easy come-back to action last week with just two matches played in Lithuania, Baltic Handball League returns with more serious activity this weekend. Seven teams will take the 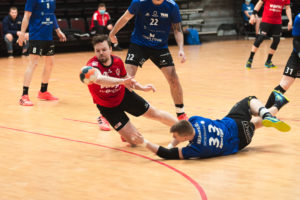 Even if the Baltic Handball League “weekend” was limited to just two all-Lithuanian matches on Saturday, there was plenty of action packed into 120 minutes of handball. Lead changed hands 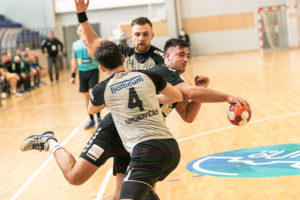 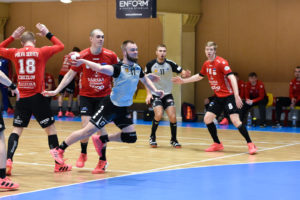 Saturday’s both matches in Baltic Handball League were played without spectators, but not without audience. Hundreds of fans followed two fascinating matches online, as HC Dragunas Klaipeda beat Serviti Põlva 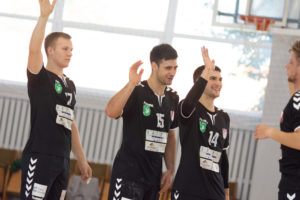 BHL is back on the road again

For months Baltic Handball League has not been able to resume the matches, especially the cross-border ones. But this weekend finally sees BHL’s return to action and with teams on

While Baltic Handball League is still suspended due to the grave situation with COVID-19 in the Baltic countries, at least two of the three national teams linked to BHL played