History will be made in Baltic Handball League on Sunday, as there will be a new winner’s name written on the trophy in Klaipeda. HC Dragunas Klaipeda beat two-time winner Serviti Põlva 28:21 (16:10) in the first semi-final, while VHC Šviesa Vilnius defeated Varsa-Stronglasas Alytus 32:21 (16:7) in the other.

Not only have Dragunas or Šviesa never won the competition, it is the first time either team has qualified to the final. Their best results so far were third-place finishes in two consecutive seasons – Šviesa in 2010/2011 and Dragunas a year later. In the regular season, Šviesa won both encounters, the last one just two weeks ago by 31:28.

In the opening semi-final Serviti met the Final Four hosts Dragunas, who they had not beaten for more than two years. The match was very aggressive from the start, but it was the Estonians who suffered – three two-minute penalties in the opening eight minutes did not make it easy to find a rhythm.

Goals were a luxury at the start of the match, Serviti’s first came only when the clock showed 6:28, but Dragunas was struggling as well. Benediktas Pakalniškis and Eston Varusk made couple of great saves, both also stopping a penalty throw in the first half. However, Varusk got injured and was forced to come off with Dragunas going 4:1 up.

Serviti had problems in stopping Deividas Virbauskas, but in the 18th minute the score was 8:6. Then Lithuanians scored five unanswered goals and by half-time Dragunas led 16:10. Serviti came out strong from the dressing room, cutting the deficit to three goals.

Then Pakalniškis – named Man of the Match at the end – again put a lock on his goal, plus Virbauskas and Lukas Juškenas picking up great scoring form. Dragunas took a comfortable 28:21 win with Virbauskas nine and Juškenas six times on target. Ülljo Pihus scored four goals for Serviti.

The second semi-final started much in the same fashion as the first – goals were hard to come and goalkeepers were on fire. There were no goals from positional attacks for almost seven minutes and Šviesa’s Edmundas Peleda became a wall between posts. The 28-year-old made eight incredible saves in the first ten minutes.

By 14th minute Karolis Antanavičius put Šviesa ahead 6:1. The game evened for a while and in the 20th minute Varsa-Stronglasas’ Vilius Juozaitis scored for 8:5. For the last ten minutes of the first half, Šviesa went into free-scoring mode and by half-time the regular season winners were up 16:7.

Goalscoring was definitely not an issue at the start of the second half, as inside first two minutes six goals were scored with Varsa-Stronglasas cutting the deficit to seven goals. Šviesa was not about to let a clear lead slip away and in the 38th minute Laurynas Palevičius extended it to ten goals, scoring 21:11.

The closest Varsa-Stronglasas got, was seven goals, but Šviesa qualified to the final with a 32:21 victory. No surprise, that Peleda was voted as the Man of the Match, while Antanavičius scored eight goals for the winning and Žygimantas Micevičius five goals for the losing side.

Decisive matches of the BHL Final Four in Klaipeda:

On photo: Deividas Virbauskas scored nine goals in the semi-final for HC Dragunas Klaipeda and moved on top of the scoring standings with 79 goals this season. (Photo: Virginija Kesmine/BHL). 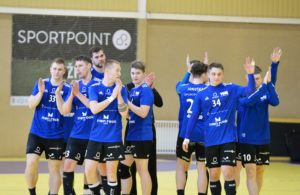 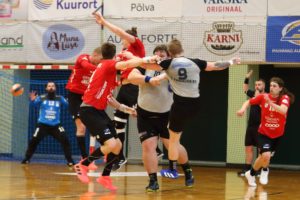 It may have been just six games over two days in Baltic Handball League, but the weekend offered everything. There were surprises, clear victories, some narrow ones and a draw,