Granitas-Karys Kaunas – VHC Šviesa Vilnius         22:21 (12:11)
One of this week’s Lithuanian derbies. VHC Šviesa started with a lead 8:3, after 15 minutes of the game. Granitas-Karys did not let them ‘run away ‘ and before the break reached 10:10. After first 30 minutes they were leading – 12:11. In the second half of the game, the leaders changed several times, but at the end of game Granitas-Karys player Karolis Dambrauskas scored winning goal – 22:21.

Karolis Dambrauskas, player of Granitas-Karys
“It is always difficult to play against Šviesa. Today we wanted to rebound about yesterday lose. We came in focused, concentrated and ready to play. On the first half the game was not going in our way, but as game progressed we showed character, we showed strong will and determination to win the game –  which we did. I am very happy about that.”

HC Vilnius  – Varsa-Stronglasas Alytus         36:34 (18:15)
HC Vilnius finished this weekend with a perfect balance two game two wins and both against other Lithuanian teams.The start of the game was better for the Alytus team, but by the end of the first half HC Vilnius had reached 18-15. Also second half went quite even on the field and also on the score board, but at the end Vilnius scores two goals more in this game and won the second game this weekend – 36:34.

Martynas Lapinskas, player of HC Vilnius
“It was very emotional game. We got a lead several times, but Alytus managed to get back to us. I think the main reason that we won was every player’s spirit and emotions. We are happy about second win this weekend and ready to keep training for the next matches.”

Nedas Buronko, Alytaus Varsa-Stronglasas
“First of all, congratulations to the Vilnius team! Today’s match was quite difficult, especially after yesterday’s fight with “Šviesa”. We made many mistakes in defence and attack, we have received many removals. Vilnius team took advantage of our mistakes and won today’s match.”

Ülljo Pihus, player of Põlva Serviti
“It was quite easy game. We were in control of the game. In the first half our finishing was little bit poor, but that is pretty much the only negative aspect of our game. We now must continue with confidence and look forward to the next weekend.”

Viljandi HC – SK Latgols Ludza   44:22 (21:8)
After yesterday’s game Viljandi HC were not satisfied with their performance, so today they wanted to correct their mistakes. Already after first half they were leading by 13 goals – 21:8. On the second half Viljandi HC doubled their scored goals and in high score game, secured their fifth win in five games – 44:22.

Kristo Voika, player of Viljandi HC
“Today we started a lot better. Our attitude was a lot better and that made game much easier for us. We could play with all our players and it was nice and enjoyable game. Maybe we did not concentrated all 60 minutes, but most of the time we were in control of game. I think yesterday’s game should have been the same, today we did a lot better. ”

SK Tapa – HK Ogre          38:39 (20:18)
In the goal-rich game, HK Ogre wins their first two points in this season. Although after the first half the Ogre team were losing with a difference of two goals, in the second half they played very effectively and achieved the desired result of the game. HK Ogre’s five players – Lielais, Leja, Lazdiņš, as well as Haisa and Patsykailik, scored 32 out of the team’s 39 goals.

Ilja Kosmirak, player of SK Tapa
“The beginning of the game was good. We had the will power and were ready to fight but at the end of the game we didn’t have enough confidence and our defense was weak. We had a lot of stupid mistakes towards the end of the game and because of that our game suffered and we lost our lead.”

Andris Molotanovs, coach of HK Ogre
“We are playing better with each game, this weekend the opponents were good teams, the games were good and we have gained a lot from these games. Compared to Latvian handball, this is a much faster handball, very fast transitions, it can be seen in the result. In our team I would like to praise Elvijs Kušners, who showed a very good game today, sometimes repelling incredible shots. We changed few tactical things both in attack and defence. If so far in the attack we have struggled a bit with how to play with 7 players, then today we proved that this could be one of our trump cards. The game was tough, but it is gratifying that two points have been earned. In a good mood, we return home and prepare for the trip again to Estonia next weekend. We will try to do our best to “take” a point there as well.” 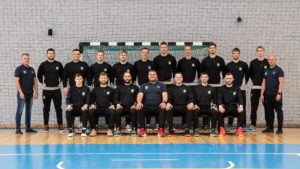 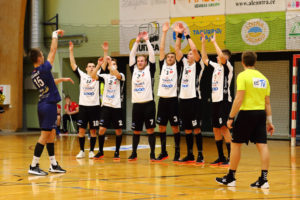 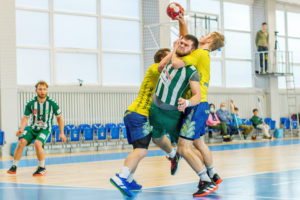 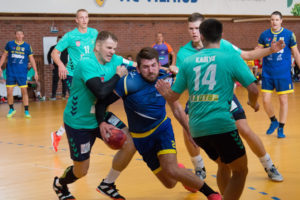 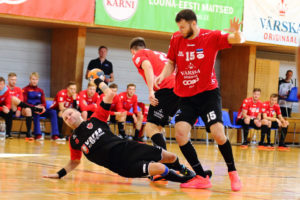