– HC Dragunas Klaipeda – Põlva Serviti     32:30 (15:18)
In the first 15 minutes of the game Lithuanians got some good lead – 10:5, but Põlva Serviti managed to get back in the game and the first half they finished in lead – 18:15. In the second 30 minutes of the game, the game on the scoreboard was similar, 1-2 point lead to the one or the other team. At the end Lithuanians were a little bit better and secured victory by 2 points (32:30) and also took care of the Polva’s first loss.

Gintaras Cibulskis, coach of the HC Dragunas
“First 15 minutes of the game were good, but after that we started to make mistakes and let Põlva Serviti score easy goals. If we did not score, they got a chance to score goals on the fast break. That’s way we lost first half. On the second half we made less mistakes, our defense was better and also our goalkeeper was in level. Until the last second nobody knew who will win this game. We were luckier this time.”

Ülljo Pihus, player of the Põlva Serviti
“It was intense high-paced game. At first our attack wasn’t at the level we have come to expect this season and it took some time to get in to the rhythm. HC Dragunas gave us a battle and we fought hard, but that was not enough today. Congratulations to Dragunas. Now we have to rest and travel to Dobele. We can expect similar battle tomorrow.”

Artur Oganezov, player of the SK Tapa
“We started first half with great intensity, but couldn’t realize our chances and therefore the gap increased. Then the second half started and they raised the tempo and we couldn’t answer with the same pace as they were playing. On the positive side, we fought until the end and could use some of our youngsters, for example Marcus Rättel, who played a fantastic game and scored all of his 6 shots he took. We have to learn from our mistakes and focus on the tomorrow’s game.”

– ZRHK Tenax Dobele – HC Kehra/Horizon Pulp&Paper     31:22 (16:9)
Although the beginning of the game was quite similar, already in the second half of the first half the Dobele players took a safe lead – 16:9. At the beginning of the second half, Andis Ērmanis scored three goals in a row, followed by Tuminskis, Šuleiko, Kreicbergs and Juzups, thus achieving a double-digit goal difference for the first time – 23:12. By the end of the game, the Estonians managed to reduce the goal difference a bit, but that did not prevent the ZRHK Tenax Dobele team from winning a convincing victory with the result – 31:22.

Kristo Voika, coach and player of the Viljandi HC
“I think the lack of hard games in the past three weeks had some influence on our game and we did not play our best game today. HC Vilnius dismantled our defense few times and that made as unconfident, but luckily we made few fast and easy goals and also our goalkeeper was in level, so at the end the result is good and that is the only thing that matters at the moment.” 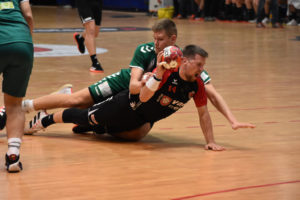 In Baltic Handball league there is short break because of EHF European Cup games, where also two teams from BHL are qualified to play in the 3rd round. Those teams 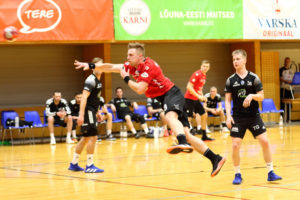 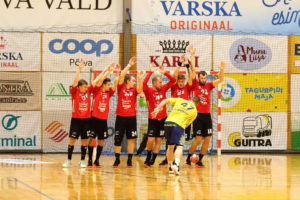 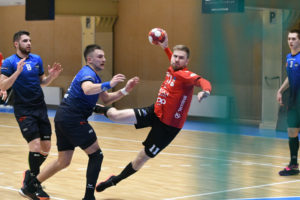 In this weekend several Estonian and Latvian derbies on the plate

Baltic Handball League is offering another 10 games this weekend and again it won’t be boring – Estonian derbies, as well as Latvians are playing against each other. One of 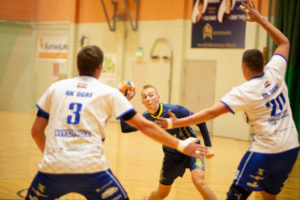 Player of the month – HENDRIK KOKS: “I think the hardest part in handball is to keep your mind cool and make good decisions.”

Last week there was a player of the month of October announced. Hendrik Koks – centre back player from the HC Viljandi team. He has made 54 goals out of 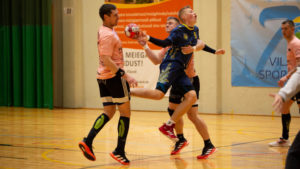 After this weekend only HC Viljandi is still perfect – with nine victories in nine games. Põlva Serviti lost their second game, in this weekend, against ZRHK Tenax Dobele. Dobele