Lost but won: VHC Sviesa advanced to the Final Four

Two Lithuanian and two Estonian teams will play in the Final Four of the Baltic Handball League (BHL). This was clarified after the return quarter-final match between VHC Sviesa and Tenax Dobele.

The Latvians won the return leg in Vilnius 37:35. However, the VHC Sviesa handball team advanced to the semi-finals after winning the first match in Dobele by a larger five-goal margin, 32:27.

Oskars Arajs led the winning team with 10 goals. Nils Kreicbergs had 8, Emils Kurzemnieks scored 6. The top scorer for the home side, with 9 goals, was Tadas Rasakevicius. Valdas Drabavicius and Eimantas Sinkevicius each scored 6 goals.

‘Well, we lost the match, but even that result was enough to qualify us for the next round. That was the main objective – the Final Four. Today’s match was nervous. We had a five-goal lead at the start (7:2), but the Latvian team brought their experience and their character back into the match. We committed tactical errors in attack in the second half, allowing our opponents to grab the lead. However, we are happy that we managed to handle our emotions and minimal tension at that time. For the time being, everything is OK; we are thrilled to be in the Final Four and will continue to work hard,’ said VHC Sviesa coach Zygimantas Sinkevicius.

‘In the sum of the two games, the better team wins. Of course, we hoped to reach the next stage, but a little was missing. The two games were very similar. We had a bad first half and it was decisive. Good luck to the Vilnius team in the Final Four,’ – Sandris Versakovs, Dobele’s coach, spoke after the game.

The quarter-final return match between Granitas Kaunas and Dragunas Klaipeda, which was scheduled for Saturday, was postponed due to COVID cases in the Kaunas team. The match will take place next weekend. In the first meeting, the defending BHL champion Draunas built up a 7-goal lead (31:24).

The Baltic League Final Four will take place on 23-24 April in Viljandi, Estonia. After the regular season, the top two teams, Viljandi HC and Polva Serviti, have qualified directly to F4. It is already clear that the two semi-finals will be played between Estonian and Lithuanian teams. Polva Serviti will meet VHC Sviesa in the semi-finals, while regular-season winners Viljandi HC will face the winner of the Granitas Kaunas and Dragunas Klaipeda pair.

The Baltic Handball League (BHL) championship 2021-2022 is over. Lithuanian and Estonian clubs shared the medals in the Final Four in Viljandi. The semi-final duels take place on 23 April.

The Grand Finale of BHL: who will lift the trophy?

The Baltic Handball League (BHL) has reached the Final Four, a moment of critical duels. The Final Four of the BHL season 2021/22 will be held in Viljandi, Estonia. It

Boarding completed: Dragunas will defend the title in the F4

The quarter-final round of the Baltic Handball League (BHL) is over. The semi-finals will feature two Lithuanian and two Estonian clubs. Dragunas Klaipeda, the defending champions, took the final spot

Last call to the Final 4: Granitas or Dragunas?

The last quarter-final match. A quarter-final that should have been played a week ago, but for obvious reasons (COVID) it was postponed until this weekend. Granitas Kaunas and Dragunas Klaipeda

VHC Sviesa vs Dobele: who will make the Final Four?

Another Final Four member will be determined on Saturday afternoon (April 2, 14:00). VHC Sviesa welcomes Latvia’s Tenax Dobele at home. After the first match in Latvia, the Lithuanian club 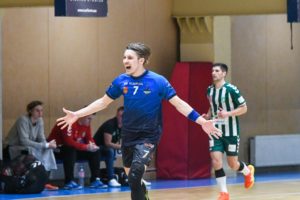 Dragunas & VHC Sviesa are a step closer to the F4